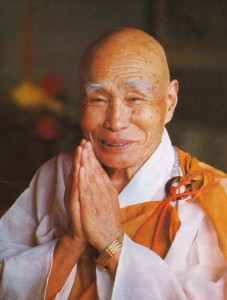 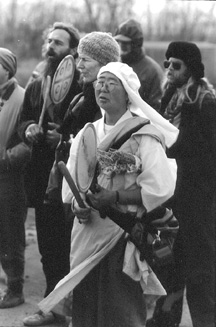 Jun san will begin her annual Peace Walk from the Grafton Peace Pagado culminating in a Peace Crane Ceremony on March 11 at the gates of Indian Point. People are welcome to walk with her for all or any part of the way.

Below is some more information about the earlier part of her ,,. Please do pass this on to other interested parties and post to your social networks. Join in if you can.

After the Peace Crane Ceremony at Indian Point there will be a potluck dinner for the Walkers and for those who come to our seventh annual Fukushima Commemoration and Indian Point update. Mark your calendar now! Details to follow. There will also be a program commerating Fukushima in NYC on March 10.

For our NYC friends: the Peace Walkers will be meeting at the Cortlandt Metro North Train Station on the morning of March 11 for the final leg of the Walk. We will have transportation back to the train station for those who would like to stay for the potluck and program.

Buddhist nun Jun-San with the Grafton Peace Pagoda is planning her annual 11 day walk in March to commemorate the 2011 Fukushima disaster.

On March 7th or 8th, she will be in the White Plains area and is looking for groups and congregations to be supportive of her NO NUKES messaging.

Here is more info about Jun-san:

Accompanying them on their walk, was a Japanese Buddhist Nun from the Nipponzan Myohoji order. Since then, Jun Yasuda has crossed the country four more times on foot and logged in several thousand additional miles for the cause of peace. She walks beating her drum while chanting a prayer for peace Na-Mu-Myo-Ho-Ren-Ge-Kyo.

Many times, she has spent days fasting on the steps of the NY State Capitol in Albany for support of freedom for a Native American activist Dennis Banks. In 1983, during one of her fasts, she was approached by Hank Hazelton, a long time activist for Native Americans. Hank had heard of her work and offered her a parcel of land in Grafton, New York, for the purpose of building a “Monument for Peace”.

In October 1985, work began on the structure soon to be called the Grafton Peace Pagoda. After 8 years of toil and struggle, the Pagoda was completed and dedicated in the fall of 1993.

Since the Japanese Nipponzan Myohoji order is not permitted to solicit money for any reason, the Pagoda was built entirely with donated labor, funds and materials. Many volunteers contributed tens of thousands of hours of labor to complete the Pagoda. Recycled materials and tools also found new life during construction of the project.

Over the course of time, visitors from many nations and all walks of life began to arrive at the site. Representatives of many faiths; Christians, Jews, Muslims, Hindus, Native Americans, Bahai’s, Sufis, Buddhists, Spiritualists and Agnostics have all been drawn to this special place.

Peace Pagodas are a symbol of non-violence dating as far back as 2000 years ago. During that time, the Emperor Ashoka of India, a notoriously bloody warlord, was approaching after a particularly wretched battle by a Buddhist Monk who admonished him for his wrong doings. From that time on, Ashoka became a became a fervent believer in Buddhism. After his conversion, he gave up his warlike ways and began erecting Peace Pagodas.

In 1931, Nichidatsu Fujii, teacher of the Nipponzan Myohoji order, met Mahatma Gandhi in India. They became friends, and together joined in sending out prayers for peace and non-violence throughout the world even as the clouds of World War II began to grow on the horizon.

“Civilization is not to kill human beings,
Not to destroy things, not to make war;
Civilization is to hold mutual affection
And to respect one another.”
–Most Venerable (Nichidatsu Fujii)

Previous postLocal Officials Feel Shortchanged by Gov. with Indian Point Next postEarthquake is a reminder that Indian Point is a clear, present danger