Before the first backhoe broke ground in 2015 for the new 22-acre Valley Energy Center off Route 6 in the Orange County town of Wawayanda, concerned neighbors and county residents were already organized as Protect Orange County (POC). As early as 2013, they were picketing the proposed site to protest the permits issued for a massive fracked gas plant.

These local opponents of the 680 megawatt plant, built by Competitive Power Ventures (CPV), were worried about the effects of toxic emissions and particulate matter on their families, homes and farms. And they weren’t crazy about the proposed Valley Lateral Project, a 7.8 mile feeder pipeline crossing 13 waterways on its way north to the new plant from the Millennium Pipeline, which carries fracked gas from Pennsylvania’s Marcellus Shale fields to Rockland and Westchester Counties.

On a global scale, the Valley Energy Center will exhale about 4.6 million tons of climate-altering greenhouse gases per year, according to a POC expert’s estimate. This, and everything about the CPV deal, just didn’t seem to fit in with N.Y. Governor Andrew Cuomo’s 2014 rejection of fracking, his vision for resilient distributed microgrids, and his ambitious clean energy goals of 50% renewable energy by 2030. Or so thought POC supporters. Did they smell a rat? 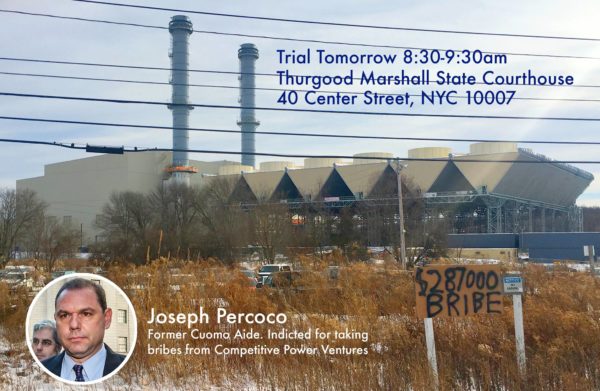 Local Valley Energy opponents were not the only ones who caught a whiff of rodent. In November 2016, the office of then-U.S. Attorney for the Southern District Preet Bharara indicted eight men on charges of state pay-to-play corruption, including Governor Cuomo’s erstwhile executive deputy secretary and confidential aide Joseph Percoco, who pleaded not guilty to six counts of extortion and soliciting bribes. The alleged favors included a $90,000 “low-show” job with CPV for his wife, and $278,000 in bribes—which a financially-strapped Percoco referred to, “Sopranos”-style, as “ziti”—from former CPV executive Peter Galbraith Kelly. For his part, Percoco was to manipulate state procedures in order to smooth the way for the Valley Energy Center’s permits and financing.

On March 13, after a two-month trial, Percoco was found guilty on three of the six counts, including soliciting bribes from CPV. Despite detailed testimony from a CPV whistleblower that corporate higher-ups were in on co-defendant Kelly’s alleged bribery scheme, the jury could not reach a verdict on his charges, and the judge declared a mistrial for Kelly. Sentencing for Percoco is set for June. 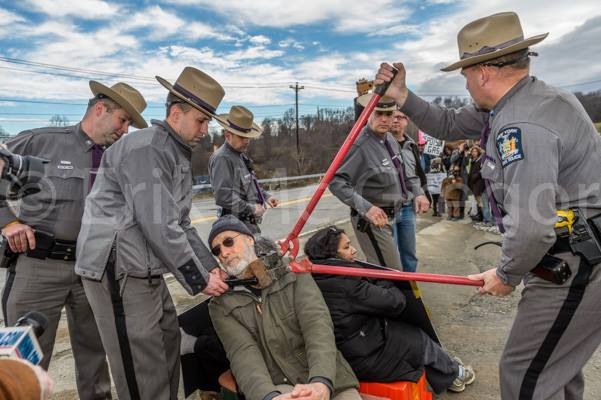 POC Chair Pramilla Malick–who attended the Manhattan District Court  trial almost daily–had already seen the inside of a courtroom—and a cell—in the CPV-Valley Energy fight. She, along with actor and Orange County resident James Cromwell, and POC member Madeline Shaw served time in the Orange County jail in Goshen last year for a 2015 civil disobedience incident at the plant construction site. At a POC-sponsored press conference last week in Goshen, Malick welcomed the March 13 verdict: “This is a vindication of years of efforts by member of Protect Orange County to alert officials to red flags and improper activities,” said Malick. “This is a project built on bribes and lies, something we had long known, but the trial brought some daylight to the dirty deals we sensed.”

So, why should Rockland County residents worry about a power plant in Orange County?

If the sight of some Albany rock slime being exposed briefly to daylight isn’t enough, note that the Valley Energy Center lies just 30 miles northwest and upwind of Sloatsburg. A group of Rockland County clean-energy advocates from 350NJ-Rockland and the Rockland Sierra Club drove up for last week’s press conference/rally at the Valley Energy site. “You can see them looming for miles—two huge smokestacks,” organizer Jordan Dale (who has contributed to NNaV in the past) told Earth Matters. “By the time you pull up in front, you realize just how enormous this facility is . . . The greenhouse gases it will spew into the atmosphere will speed global warming for all of us.” 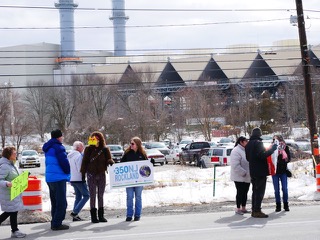 Hudson River watchdog nonprofit Riverkeeper, which has campaigned to close Westchester County’s Indian Point Energy Center’s nuclear reactors, is also opposed to the CPV-Valley Energy Project. They insist that the fracked-gas electricity won’t be needed when Indian Point shuts down as planned in 2021.

Riverkeeper has also weighed in on air permits issued in 2013 to CPV for the Valley Energy Center. Based on shocking trial testimony of high-level bribery schemes at CPV, Riverkeeper wrote to the N.Y. State Department of Environmental Conservation (DEC) on March 9, before the Percoco verdict was reached, asking that they “evaluate carefully whether CPV is a suitable entity to hold permits in the State of New York and whether to revoke, suspend or modify the regulatory permits for the Valley Energy Center.”

The big picture: a fossilized future?

Advocacy groups can tick off any number of local objections to the $900 million Valley Energy Center, which POC says will consume up to 150 fracked-gas wells a year. But they, and other fossil fuel opponents, are also keenly aware of the bigger picture—far bigger than any single, albeit gigantic, gas plant.

Let the Sane Energy Project spell it out for you. They posit a fossil fuel “master plan,” in which no-frack New York is a fully built-out pipeline transport corridor to carry fracked gas from Pennsylvania and Ohio to coastal liquified natural gas (LNG) transfer stations for more lucrative overseas export. To justify this infrastructure investment and create a long-term domestic market, gas plants like Valley Energy Center and the even larger Cricket Valley Energy Center in Dover N.Y. (now under construction) are dropped in along the pipeline routes. 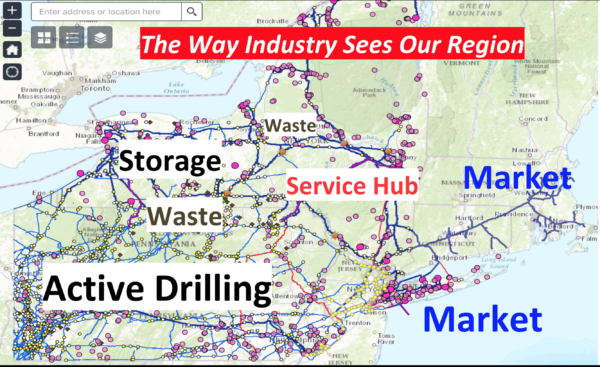 In our region, one proposed LNG transfer station on Long Island was killed by Gov. Cuomo in 2015. Nationwide, the Sierra Club has been fighting in federal courts to block these LNG export facilities on climate change grounds but, after a string of losses in the last two years, they’ve withdrawn their last federal case, and are mulling a change in strategy. The lucrative boom in U.S. LNG exports is well underway, however, and is unlikely to be halted or slowed in the current political climate.

A disappointed Joseph Percoco told reporters outside the Foley Square courthouse after his guilty verdicts that he will be considering his options between now and his June sentencing.

The Valley Energy Center has just started firing up its generators in test mode, and residents’ complaints of noxious odors and adverse health effects took up all the oxygen in the room at the March 8 meeting of the Wawayanda Town Board.

POC and its supporters know that they are fighting the powerful, deep-pocketed interests behind the fracked-gas buildout. And agencies charged with protecting citizens, their property and the environment are coming up short. The Federal Energy Regulatory Commission (FERC), for one, is seen as little more than an industry rubber stamp for gas pipelines by most environmental advocates. Now, freshly outfitted with fossil-fuel friendly Trump appointees, FERC has given the all-clear to the Valley Lateral Project pipeline, despite a NYS DEC withdrawal of a water permit, and a legal objection that has just been overturned by a federal appeals court.

Finally, with his clean-energy talk, and his fracked-gas walk, who knows what Andrew Cuomo’s energy and environmental agenda really is?

Among the activists, politicians and elected officials at the March 15 press conference in Goshen who called on the DEC to revoke Valley Energy’s permits was an early supporter of the CPV project, Republican Orange County Executive, Steve Neuhaus:

“The State should revoke any and all permits granted to CPV,” Neuhaus said. “You cannot act illegally in the permit approval process and then keep the permits. When the arrests happened, I called upon the State to review all of the permits that were issued. Now that a conviction has been handed down, State officials must do more. They should introduce and pass legislation creating a presumption of invalidity for any project in which criminal conduct by public officials occurred and for which permits were issued.