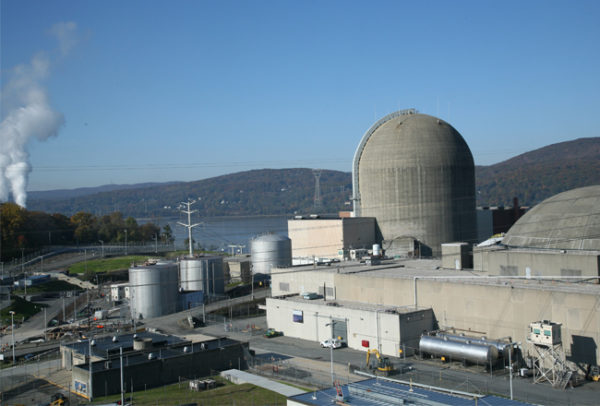 A state task force created to address the impact of the planned closing of Indian Point Energy Center is asking the nuclear plant’s owner and operator to consider opening up parts of the site to development.

The recommendation was one of several in a 280-page annual report the Indian Point Closure Task Force released May 9.

The task force was created last year by Gov. Andrew M. Cuomo shortly after he announced a state settlement with Entergy Corp. that would fully shut down the company’s Indian Point nuclear plant by 2021.

The annual report is the first of six the task force will release through 2023 addressing challenges the closing of the plant will create in the village of Buchanan, town of Cortlandt and Westchester County.

“The task force recommends that, based on the D.L. English report on possible reuse opportunities at the plant site, Entergy agree to release segments of the Indian Point property as soon as practicable to the appropriate development entity,” one of the conclusions in the report read.

Entergy has said it’s waiting to finalize its own decommissioning plan before making any decisions. But in the meantime, the state is exploring possibilities for the land.

The D.L. English report identifies three separate parcels on the 240-acre site that it says are capable of being reused relatively soon. The parcels are referred to as “non-impacted” land, meaning it’s suitable for near-term use.

The first such parcel, identified as Parcel A, is a 50-acre tract on the southeast side of the property near Broadway. The land has a training facility for Entergy. The best use of the land, according to an appraisal included in the report, is to either repurpose the training facility into an office or data center, or clear the site for manufacturing and heavy industrial use.

The second, Parcel B, includes about 50 acres of undeveloped land on the north side of the property. The site is wooded, rocky and potentially home to endangered animal species, the report notes, limiting potential redevelopment scenarios.

A separate 17-acre parcel across Broadway from the main campus could also support near-term development similar to the uses suggested for Parcel A, according to D.L. English. The report noted that the site’s limited acreage and a natural gas transmission line that runs through it would likely limit the scale of any future opportunities.

The report’s suggestions are meant more as a starting point for future discussion on the land’s redevelopment. In the conclusion to the report, D.L. English officials said their goal is only to provide facts to help guide the decision making of the state task force, Cortlandt and Buchanan.

The task force’s annual report also attempts to address concerns about lost tax revenue after Indian Point’s closing. Buchanan is set to lose $3.5 million per year, a little less than half its annual budget. The Hendrick Hudson School District, meanwhile, could lose $23 million per year, about one-third of its annual budget. Cortlandt will lose $900,000 per year in revenue without Indian Point, about 2 percent of its budget.

The report recommends the Hudson Valley Regional Economic Development Council set aside funds to focus on attracting economic development to tax jurisdictions affected by Indian Point’s closing. It also notes the $30 million the state appropriated in its 2016-17 fiscal year budget to the Electric Generation Facility Cessation Mitigation Program, created to support communities affected by the shutdown of a power plant.

Another $24 million was added to the fund in this year’s budget at the urging of state Sen. Terrence Murphy and Assemblywoman Sandy Galef, who each represent areas affected by the closing.

The task force said in the report that it will focus on finding “new economic development opportunities in the affected taxing jurisdictions that can help to replace lost PILOT (payments in lieu of taxes) revenue.”