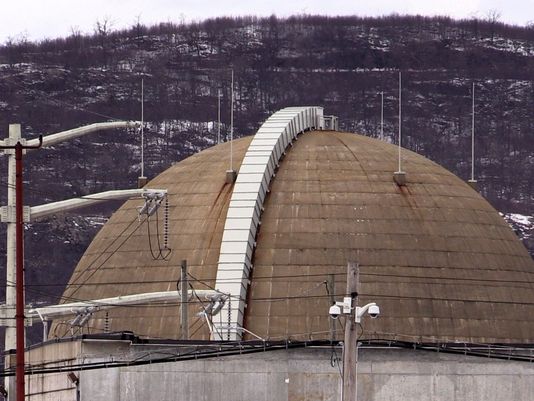 The environmental group Riverkeeper says a proposal to re-use portions of the Indian Point site before the power plant is cleaned up is unrealistic.

Instead, it wants the state to collect taxes on spent nuclear fuel to help local towns weather budget shortfalls.

In a letter to the head of the state Public Service Commission, Riverkeeper legal director Richard Webster attacked a report issued by a state task force formed to come up with ways to support nearby communities when Indian Point closes in 2021.

Specifically, Webster says the task force’s findings relied on an assumption that Indian Point’s owner, Louisiana-based Entergy, would be willing to turn over parts of its land for re-use while the plant is being torn down. 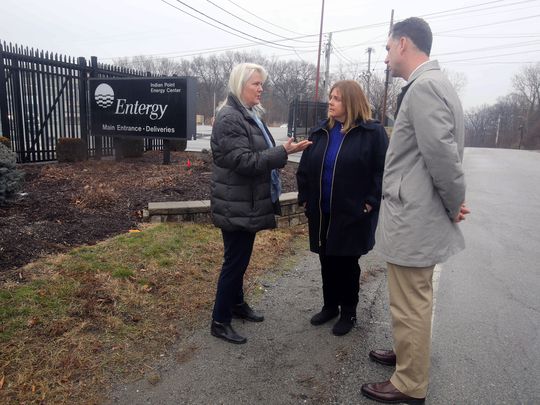 Linda Puglisi, supervisor of the Town of Cortlandt, left, Theresa Knickerbocker, mayor of the Village of Buchanan, and Joseph Hochreiter, superintendent of the Hendrick Hudson School District, talk outside the entrance to the Indian Point nuclear power plant Jan. 17, 2017. Officials of the town, village and school district are now challenged with finding ways to make up the revenue that will be lost when Indian Point closes in 2021. (Photo: Seth Harrison/The Journal News)

“There is no evidence, however, that the drafters of the Reuse Study evaluated whether this fundamental premise was reasonable, and in fact, Entergy has recently stated publicly that is does not intend to allow the early release of any parcels,” Webster writes.

Webster’s comments appear to put Riverkeeper at odds with the heads of local towns and the superintendent of the Hendrick Hudson School district, who would prefer that portions of the 240-acre property be put back into use soon after the shutdown to generate needed tax revenue.

The town of Cortlandt, the village of Buchanan and the school district face the loss of nearly $30 million in annual property tax revenues, a reliable source of income for decades that has kept property taxes low.

In April, the Indian Point Closure Task Force identified some 100 acres on the Buchanan site that could be opened to development while the nuclear power plant is being dismantled.

Any plan to re-use the site would not only need the backing of Entergy but the U.S. Nuclear Regulatory Commission. Entergy has not announced what it will do with the site once it shuts down.

In his comments, Webster suggested taxing nuclear operators for the time their site is unusable as well as levying taxes on spent nuclear fuel. A bill pending in the state Legislature would allow the state to levy such a tax.

“A creative plan to tax the storage of spent nuclear fuel is one possibility the state should explore,” Webster writes. “In effect, closed reactor sites become interim storage facilities and local communities should be compensated appropriately.”

Webster said a taxing plan would force nuclear plant operators to swiftly dismantle and clean up their sites.

Thousands of spent nuclear fuel rods are stored in cement dry casks on a section of Indian Point property the size of two football fields.

And it’s likely that Indian Point, like other nuclear power plants throughout the country, will remain de-facto storage sites for years to come until the federal government comes up with a plan to store the nation’s nuclear waste.

A proposal to send the waste to an underground repository at Yucca Mountain in the Nevada desert stalled amid political opposition. In recent months, however, there has been renewed discussions about creating an interim storage site in New Mexico.