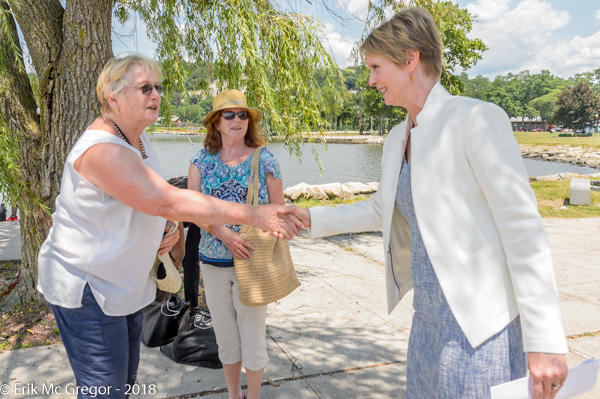 “It shouldn’t have taken four state agencies, $250k, and two years to know that it’s dangerous to put a high pressure gas pipeline under a nuclear power plant 35 miles north of Manhattan,” said Cynthia Nixon. “Now that Cuomo has finally acknowledged the risks experts and communities have been warning about for years, the state has an obligation to act and ensure public safety, immediately. Thanks to Governor Cuomo’s inaction over the past 5 years, the 20 million people that live and work in the 50 mile impact zone around Indian Point are now in jeopardy due to a massive, high pressure, fracked gas pipeline running alongside Indian Point Nuclear Power Plant.”

Following the press conference, local community leader Courtney Williams, PhD and cancer researcher whose family lives 400 feet from the pipeline, gave Ms. Nixon a tour of pipeline and power plant sites and explained their threats to the community and beyond. “I’m so grateful Cynthia Nixon came to Peekskill. It’s one thing to know that there’s a gas pipeline under the power plant or next to the elementary school, but to see it and to speak to those impacted is something else entirely. We here in Peekskill are tired of fighting our own governor to protect us. We need Cynthia Nixon in Albany to stop the flow of gas, ensure there’s no more gas infrastructure at the Indian Point site, and that we have a Citizens Oversight Board to watchdog the process of shutting down Indian Point as safely as possible.”

After the infrastructure tour, local elementary school students showed Ms. Nixon around their kindergarten Playground, 400 feet from the Spectra/Enbridge AIM pipeline expansion. Irene Lindberg, 8 years old, one of the Buchanan-Verplanck Elementary School students who gave Ms. Nixon the tour said, “I think Cynthia Nixon would be a great governor because she listens to the people, even kids!”

Following the tours, Ms. Nixon held a small roundtable of local impacted residents and then a meet and greet with a standing-room-only crowd of community members and local elected officials at The Beanrunner Cafe in downtown Peekskill.

Peekskill Common Council passed a resolution in March 2018 calling on Governor Cuomo to release the risk assessment and citing concerns about potential dangers of the co-location of the fracked gas pipeline and the nuclear power plant. Councilmember Colin Smith said, “We are grateful that Ms. Nixon is standing with Peekskill and calling on the state to protect our community and the 20 million New Yorkers who are at potential risk in light of the findings and questions raised by the risk assessment.”

Robert Kesten, Candidate for State Senate 40th District, said “with an incomplete risk assessment, the pipeline needs to be closed down until we can be guaranteed that it is safe for people in the surrounding areas, and I don’t believe that it is a legitimate possibility.”

The decommissioning of Indian Point, set to begin in 2020 and 2021, does not mitigate all the risks associated with the site. Gary Shaw, a leader of Indian Point Safe Energy Coalition said, “The spent fuel storage units at Indian Point are each designed to have a maximum of 264 spent fuel assemblies per unit. As of 2014, one had 1374 assemblies and the second had 1345 assemblies. We need the Governor to act now and to promote a Citizen’s Oversight Board.”

The next steps are clear. As Ms. Nixon said, “The Public Service Commission must use all of the power it is delegated by the Pipeline and Hazardous Materials Safety Administration to shut down the pipeline until public safety is assured and outstanding questions answered to the satisfaction of the community.”

Previous postNote from Gary Shaw Next postRiverkeeper letter to editor