BUCHANAN – The closure of the Indian Point plant is scheduled to begin next year,  and members of the community say they are already thinking of the safest ways that officials should proceed.

They tell News 12 that they’d like to see the state implement a citizens oversight board to act as a watchdog for those who live in close proximity.

Their idea is to have a board of 15 impartial members who don’t have any financial or economic agendas. Members would be appointed by the governor, the Westchester County executive, local government, environmental organizations and labor unions that represent the Indian Point workers.

Margo Schepart, of the Indian Point Safe Energy Coalition, and Courtney Williams, co-founder of Safe Energy Rights Group, say whoever buys Indian Point from Entergy at the end of the year may try to cut corners and save money deciding how to store the nuclear material and put public safety on the back burner.

The citizens oversight board would be full of people, they say, who are experienced and from the area – and in turn, have a vested interest.

“The radioactive material at Indian Point is going to be radioactive for something like 250,000 years,” says Williams.

That’s how long she says the nuclear material can pose a risk to the public.

Their groups worked with researchers at Princeton University who determined that if Indian Point were to go on fire or if the neighboring gas line were ever to rupture, people all the way in Montreal, Pennsylvania, and Washington, D.C. could be affected.

Their goal is to lessen any possible exposure in the years to come. They think having current knowledgeable employees of Indian Point to handle the dismantling and installing high-quality casks to store the material could do that.

The ACT would amend the Public Service Law to create a Board to oversee aspects of decommissioning the Indian Point Nuclear Power Plant in Buchanan, NY.

Purpose: To monitor the decommissioning of the Indian Point Energy Center, gather and provide information to the community, gather public comments, and make reports and recommendations to NY state officials.

At least one member would have a science background, all would serve staggered 3-year terms

Meetings: At least ten regular meetings per year with a provision for emergency meetings in certain circumstances. All meetings shall be open for public attendance and comments.

Information from Licensee – The Board can obtain the following information from the owner of the Indian Point facility on schedules specified in the Act:

Assistance from the State – The Department of Public Service shall provide administrative support including: 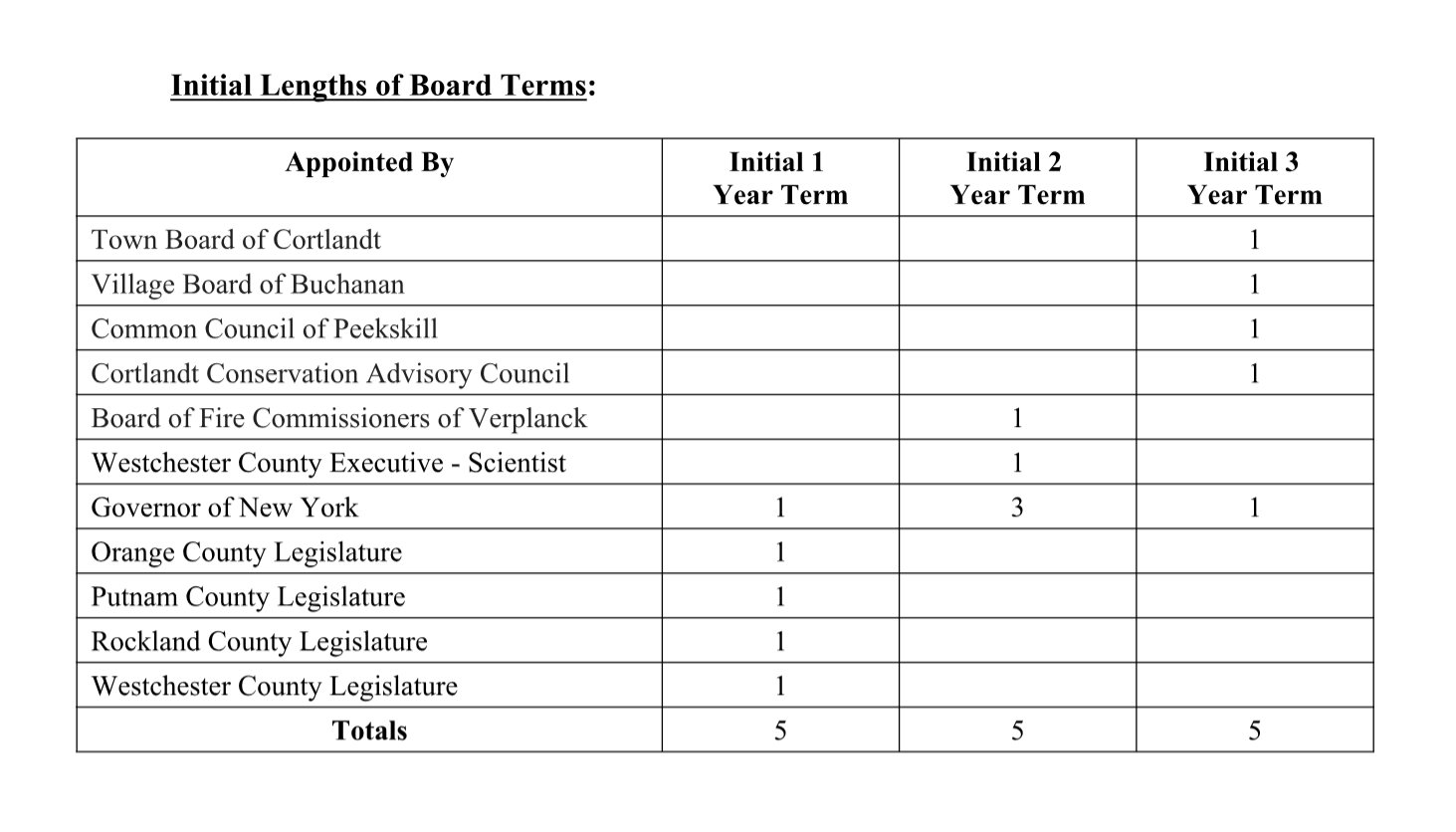 Whereas the ______(town/village/city) Board/Council strives to protect its residents, businesses and institutions.

Whereas according to the January 8, 2017 Indian Point Closure Settlement Agreement[1], Indian Point reactors 2 and 3 are scheduled to be closed in 2020 and 2021, respectively, and more than 2,700  tons of highly radioactive spent fuel will be stored onsite, and

Whereas, it will take decades to transfer the radioactive spent fuel to onsite dry cask, where it will be safer but not fully safe, and

Whereas, a large high pressure 42” diameter gas transmission pipeline transverses the Indian Point property and a rupture in the pipeline at or near that location could destroy critical Indian Point nuclear safety infrastructure and back-up cooling equipment, and

Whereas, in February 2016 Governor Cuomo, recognizing the dangers of the co-location of the pipeline and Indian Point, called for a risk assessment that was to be completed by September 2016, the scope of which was subsequently expanded and due to be completed on December 31, 2016, and

Whereas, the safe decommissioning of Indian Point is critical to the well-being of _______(town/village/city) residents, businesses and institutions, and

Whereas, the citizens in the region surrounding Indian Point will be most impacted by the decisions made regarding decommissioning, and should therefore have effective input into that decision-making process, and

Therefore, be it resolved that the _______(town/village/city) Board/Council, in the interests of its residents, businesses and institutions, urges the New York State Legislature to adopt legislation creating a Citizens’ Oversight Board to ensure the safest possible decommissioning of Indian Point and other New York nuclear reactors, as described in the Attachment A; and, be it further

Resolved, that the Governor’s Risk Assessment must be released as soon as possible so that elected officials, emergency providers and the public have the benefits of this information to be better prepared and that Entergy, the NRC and the Citizen Oversight Board can include this information in decommissioning planning; and, be it further

Resolved, that it is in the interest of the well-being of ______(town/village/city)’s residents, businesses and institutions that the State conducts and releases an assessment that includes public input that addresses the risks of siting a gas power plant on or near Indian Point prior to further discussions regarding the possibility of allowing such a plant at that location; and, be it further

Resolved, that the _____(town/village/city) Clerk shall forward this Resolution, with attachments, to the Governor of New York and to the New York State Legislators in both the New York State Senate and the Assembly that represents the _____(town/village/city), and to New York’s Public Service Commission, Department of Homeland Security and Emergency Services, Department of Health, Department of Environmental Conservation, Empire State Development, NYSERDA and the Office of the NY State Attorney General to urge these actions be taken as promptly as possible.

What’s Next for Indian Point?

Like many aging nuclear reactors, Indian Point, which has defined the Town of Buchanan for 40 years, was caught up in declining electricity prices and declining demand when its owner, Entergy Corporation, decided to shut the plant. In addition to lower revenues and costly upgrades, Entergy was facing an expensive court case plus hearings before the Atomic Safety and Licensing Board. In 2017, after high-level negotiations, the environmental organization Riverkeeper and New York’s attorney general agreed to drop proceedings against Entergy, and the corporation announced it would close Unit 2 in 2020 and Unit 3 in 2021.

Now that Indian Point is closing, the next step is cleaning up the mess. Decommissioning a nuclear reactor is a huge, potentially dangerous process. With any big deconstruction job, contractors and owners may be tempted to cut corners and maximize profits. Supervision from authorities may be lax. The primary concern of the Nuclear Regulatory Commission (NRC) is what happens inside contaminated buildings. The state task force on Indian Point will disband when Unit 2 closes. Cortlandt established a local task force, but its purview is mostly replacing lost tax revenue. So who will watch the store?

Needed: A Citizens Oversight Board

We need a legislated oversight board of knowledgeable citizens representing all the stakeholders involved in closing Indian Point. A Citizens Oversight Board could keep up with the cleanup process, translate reports from the decommissioning company and the NRC into plain language and hold public meetings. Then it could make recommendations to help protect people and the environment from exposure to the high-level radioactive waste that will be stored at Indian Point for decades. There are about 1,500 tons of high-level radioactive waste at Indian Point from the many fuel assemblies used to power the reactors. This waste will be deadly for 240,000 years. That’s how long it takes for the plutonium to decay. Most of the used fuel assemblies remain in the fuel pools at Units 2 and 3. Some are entombed in steel canisters inside massive concrete pillars sitting on a concrete pad on the property. The closing agreement stipulates that Entergy will put all of the used fuel assemblies into dry-cask storage, a decades-long process. There is nowhere else to send this waste material. No community wants to accept it, and transporting it is dangerous. We created it and enjoyed its benefits, and now it’s ours to keep.

Who pays for all this, and who’s in charge? No one knows if the decommissioning fund, which ratepayers have long contributed to through their electricity bills, will be enough. How the contractor will spend that money is an open question. During a decommissioning in Vermont, Entergy was using it to pay taxes, not for cleanup. A Citizens Oversight Board could help oversee the expenditures and keep the public informed.

While people tend to assume that the NRC will be in charge and enforce standards during cleanup, its supervision will be limited to the interior of contaminated buildings. The Environment Protection Agency will be involved, although given the cut backs in regulations, it’s hard to know how effective their oversight will be. Based on computer modeling, the casks could last 300 years or less. What happens after that is unknown. A Citizens Oversight Board—composed of community members—could track all this, make sense of the varying standards and requirements, and report back to the public as well as various levels of government.

This fall, the Indian Point Safe Energy Coalition (IPSEC) will present state legislators with a proposed bill to establish a Citizens Oversight Board. The draft legislation is online at ipsecInfo.org. Many of our legislators aren’t familiar with this idea yet. They need to hear from people in their district.

You can support this effort by contacting your state legislator. There’s a list of elected officials at Elections.ny.gov. Find your state senator or House representative, and then go to his or her website and leave a note, send an email or, best of all, call and speak to a staff member. Let them know how important this issue is. Ask for their support and their vote for a Citizens Oversight Board.

Marilyn Elie is co-founder of Westchester Citizens Awareness Network and a member of the Indian Point Safe Energy Coalition, a coalition of grassroots and environmental organizations in the Hudson Valley dedicated to the closing of Indian Point and its safe and timely decommissioning.