In 1986 the Chernobyl nuclear disaster dispersed dozens of varieties of radioactive poisons high into the air, contaminating soil, water and food over large parts of Europe and northern England, with traces of radioactivity from Chernobyl detected as far away as Rio de Janeiro.

Ground contamination around the Chernobyl site was particularly high, leading to a “no man’s land” that humans were discouraged from entering. The shape of the forbidden zone was determined on the basis of caesium-137 concentrations as measured by radiation monitors. Cesium-137 is a powerful gamma-emitter with a half-life of about 30 years, so a little less than half of all the radioactive caesium released during the 1986 explosion and fire is still present in the environment today. See www.ccnr.org/GE_Nuclear_Ukraine_2022.pdf .

Some years ago, a Russian study showed that most of the caesium-137 in the Chernobyl area has remained within the upper five centimetres of soil, so when Russian soldiers recently dug trenches there (having occupied the Chernobyl site from February 24 until April 1 2022) they would have brought much of the residual cesium-137 to the surface. This would have exposed them to unusually high levels of gamma radiation, as well as contaminating their clothes, hair and skin with radioactive dust, and no doubt causing them to inhale and ingest minute radioactive particles into their bodies.

Days of elevated gamma exposures could have caused prompt radiation sickness, with nausea and possible hair loss similar to that experienced by cancer patients undergoing radiation therapy. But internal contamination would be more insidious, leading to serious life-threatening illnesses years later. It is also possible for soldiers to carry the contamination home with them to their families, unaware of the danger.

Cesium-137 is chemically similar to potassium, so it would attach to the red blood cells and concentrate in all the softer tissues of the body. Meanwhile strontium-90, a radioactive element that is chemically similar to calcium, would concentrate in the bones and teeth. Strontium-90 also has a 30-year half-life, but it gives off no gamma radiation so is very much harder to detect than caesium-137. Nevertheless, inside the body, strontium-90 is equally hazardous, causing damage to the blood-forming organs that can lead to leukemias and other blood diseases, while compromising the body’s immune systems, as well as causing bone cancers, severe dental problems, and necrosis.

The fact that the soldiers entered the red forest (within the Chernobyl forbidden zone) is particularly regrettable, as it is exceedingly difficult to decontaminate a forest – so the radioactivity levels would have been especially high in the frosted area. The problem of decontaminating forested areas was commented on by the Japanes Ministry of Environment following the Fukushima triple meltdown in 2011 – see www.ccnr.org/MEIS_2017.pdf .

In the Fukushima region, children often contaminated their fingers by simply tying their shoe laces, which would lead to subsequent ingestion of radioactive materials if they ate any food items with unwashed hands.

Chernobyl, Ukraine (CNN)The sudden ear-piercing beep of a radiation meter fills the room as a Ukrainian soldier walks in. This is where Russian soldiers were living at the Chernobyl nuclear power plant, and radiation levels are now higher than normal.There’s no visible presence of the source of the radioactive material in the room, but Ukrainian officials say it’s coming from small particles and dust that the soldiers brought into the building.”They went to the Red Forest and brought radioactive material back with them on their shoes,” soldier Ihor Ugolkov explains. “Other places are fine, but radiation increased here, because they were living here.”

CNN was given exclusive access to the power plant for the first time since it came back into Ukrainian control.

Officials at the plant explain the levels inside the room used by Russian soldiers are only slightly above what the World Nuclear Association describes as naturally occurring radiation. One-time contact would not be dangerous but continuous exposure would pose a health hazard.

“They went everywhere, and they also took some radioactive dust on them [when they left],” Ugolkov adds.It’s an example of what Ukrainian officials say was the lax and careless behavior of Russian soldiers while they were in control of the site of the 1986 nuclear disaster. The area around Chernobyl, namely the Red Forest, is still the most nuclear contaminated area on the planet, with most of the radioactive particles present on the soil.

Ukrainian officials have released drone footage of what they say were trenches dug by Russian soldiers in that area, which is particularly radioactive. At a safe location, on the edges of that area, CNN saw a Russian military ration box that exhibited radiation levels 50 times above naturally occurring values. 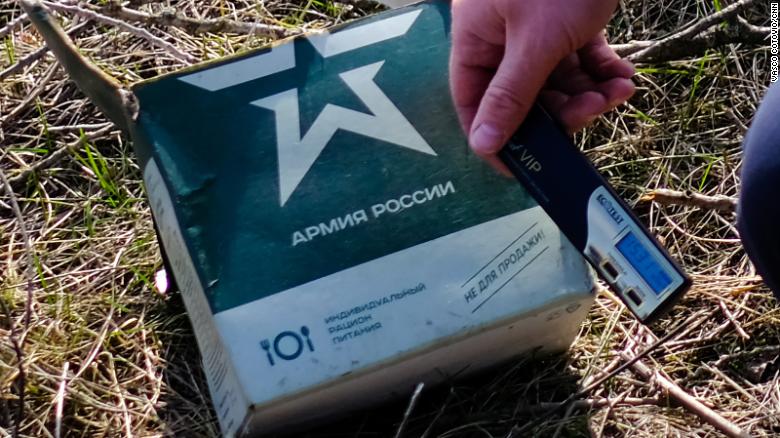 A Ukrainian soldier holds a radiation meter against a Russian military ration pack.Russian soldiers held Chernobyl for a month and are thought to have been operating in contaminated areas most of the time.”It’s crazy, really,” Ukrainian Energy Minister German Galushchenko tells CNN at the plant. “I really have no idea why they did it (go into the Red Forest).”But we can see they went in there, the soldiers who went there, came back here and the level of radiation increased.”Although Chernobyl is not an active power plant, the sarcophagus above the reactor that exploded nearly 36 years ago needs to be maintained to avoid further radiation leaks. There is also a considerable amount of spent nuclear fuel that needs to be looked after.”That confinement is supposed to have electricity, it’s supposed to have the ventilation system and so on,” Galushchenko explains. “When the country cannot control this, and we are responsible, Ukraine is responsible for the security, of course, that is a threat.” 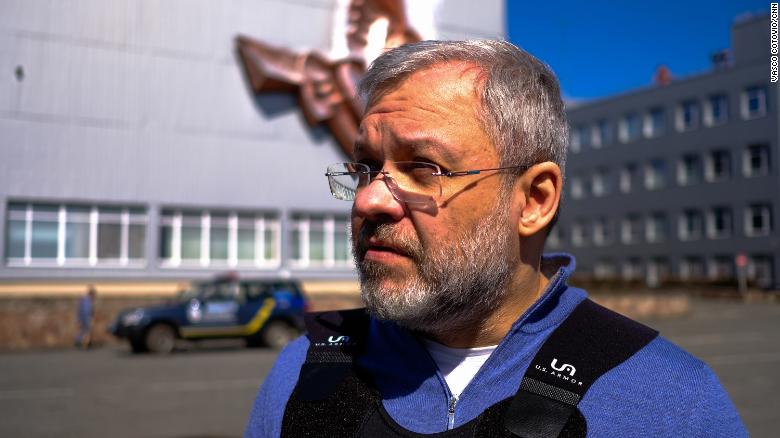 Ukrainian Energy Minister German Galushchenko says Russian soldiers have behaved irresponsibly in and around Ukrainian nuclear power plants.Part of that threat also came from how Russian soldiers managed those responsible for maintaining the nuclear facilities.[Our staff] were here from the first day of occupation, and they only had the possibility of being replaced a month later,” he says. “When people are physically and morally exhausted, when you are under threat of guns, and you have this everyday pressure from the soldiers, it’s really a very difficult job.”Volodymyr Falshovnyk, 64, is a shift manager at Chernobyl. He returned to the power plant on March 20 when the Russian military allowed the fatigued personnel to rotate with their colleagues from the nearby city of Slavutych, where many of the plant’s workers live. 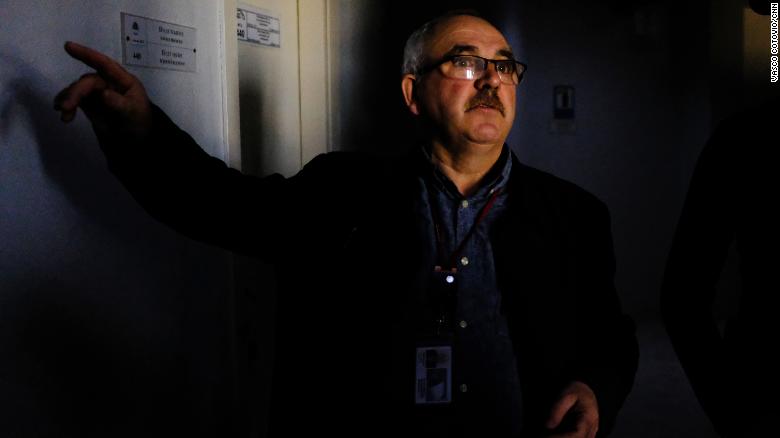 Volodymyr Falshovnyk, 64, shift manager at Chernobyl.He says the staff were working under tremendous pressure, not just because of what was happening at Chernobyl, but also because of the news they were receiving from the outside world.”Our relatives began to call and say that the city was being stormed, that there were wounded and dead,” he says. “We asked the Russians what was going on and they said there were no regular Russian troops there but we continued to hear that there was shelling.”Falshovnyk also accused the Russian soldiers of looting the power plant.”They gave us personnel from Rosatom (Russian Nuclear Agency) to escort us, and in their escort we toured the uncovered warehouses. They robbed these warehouses all the time,” he adds. 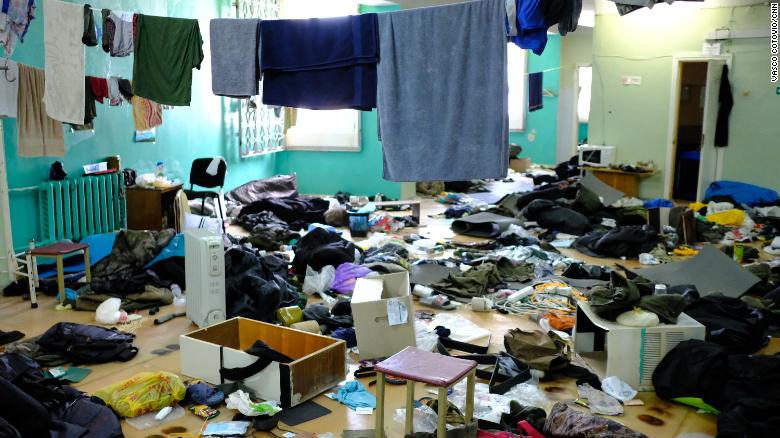 Russian soldiers ransacked the room where the plant staff were sleeping, looting some of their belongings, Falshovnyk says.Operating under those conditions was intense, but nothing compared to what the security staff endured.The 169 Ukraine National Guard soldiers, who guarded the facility, were locked in the plant’s Cold War era underground nuclear bunker, crammed up in tight quarters without access to natural light, fresh air or communication with the outside world, according to the Ukrainian Interior Minister.”They were kept here for 30 days without sufficient lighting and food. They were not allowed outside. On the last day they were taken away from here to an unknown direction,” Denys Monastyrskyy says while standing inside the bunker.The minister says he believes the men have been taken to Russia, via Belarus, as prisoners of war, but doesn’t know for certain.”Today we know nothing about their fate unfortunately,” he says. 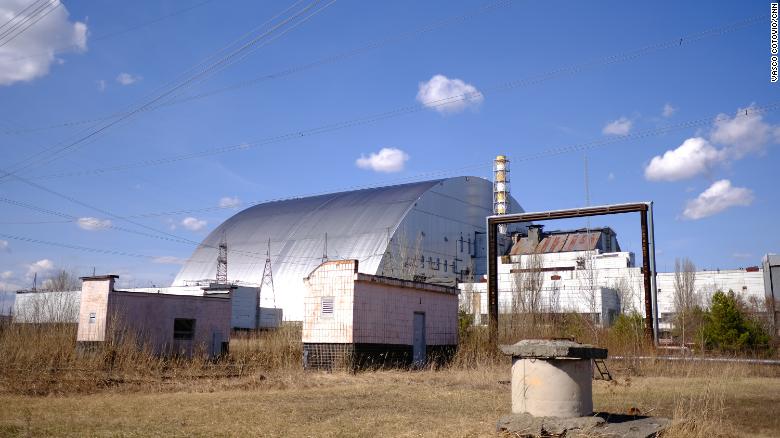 Ukrainian National Guardsmen were detained by Russian soldiers in Chernobyl’s own underground nuclear bunker.CNN was shown inside the bunker and other places usually occupied by the plant’s staff by Ukrainian officials who claimed Russian soldiers had ransacked the place. Clothes, hygiene supplies and other personal belongings were scattered all over the floor.”The Russian military went through all Ukrainian clothes, personal belongings, like dogs, in search of, probably, money, valuables, laptops,” Monastyrskyy continues. “There was looting here. The Russian military stole computers and equipment.”Moscow has said very little about what its soldiers did at Chernobyl. The last time the Russian Ministry of Defense mentioned the nuclear site was on February 26, confirming its capture and claiming it had made arrangements to ensure the safety of power units, the sarcophagus and a storage facility for spent nuclear fuel.

Chernobyl is not an isolated case

Ukrainian officials say the behavior of the Russian military and the treatment of Ukrainian staff at the Chernobyl power plant highlights the danger posed by Moscow’s invasion as it gains control of plants in other areas.In addition to the decommissioned reactors at Chernobyl, Ukraine has four active nuclear power plants, including the largest in Europe in Zaporizhzhia. The Russian military occupied that facility in early March, when it took control of the area, shelling some of site’s buildings in the process.”The situation there is also horrible, especially taking into account how they capture Zaporizhzhia because they fired at the station, with heavy weapons,” Energy Minister Galushchenko says.