A bygone era of roller coasters, Ferris wheels and carousels

The New Windsor couple, retired educators turned authors, had written regional histories about Bannerman Castle, Palisades Interstate Park and “lost” towns of the Hudson Valley when a friend mentioned Woodcliff Pleasure Park in Poughkeepsie, which they had never heard of.

“We might want to look into that,” Wesley recalls saying. And with that, they began a yearlong journey to explore, research and write The Lost Amusement Parks of the Hudson Valley.

The couple will speak about their book via Zoom at 7 p.m. on Thursday (Dec. 1) in a program sponsored by the Butterfield Library in Cold Spring. Register at tinyurl.com/lostparks121.

Along with Woodcliff, the Gottlocks unearthed the history of Electric Park on Kinderhook Lake in Columbia County; Orange Lake Park in Newburgh; Indian Point in Buchanan; and a handful of smaller parks.

Their research revealed an era of obsession with amusement parks in the U.S. During this “golden age,” from the late 19th century through World War I, there were about 1,500 pleasure parks, as they were often called, east of the Mississippi.

Such parks flourished thanks to the industrial revolution, which provided working people with time for recreation.

However, by the early 1930s, the number of eastern parks had fallen to 500. “A lot of that had to do with the arrival of the automobile,” which provided a way to travel anywhere, Wesley said. Most people were able to visit the parks because they could be reached by day liners, trains or trolleys.

A few amusement parks held on until the mid-1950s, when modern theme parks such as Disneyland put them to rest. 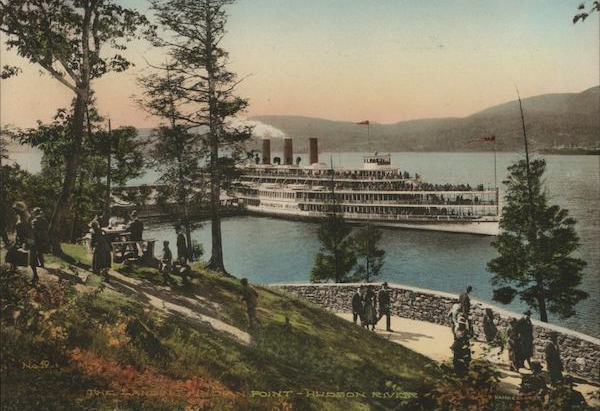 A day liner at the landing at Indian Point

In its early years, the park’s dance pavilion was a major attraction. “A full orchestra would come up from New York City on a day liner,” Barbara said. They’d play all day, then entertain passengers on the return trip to the city.

In 1949, the park was sold, and the new owners transformed it with a roller-skating rink, miniature golf, midway and golf driving range. Along with kiddie rides, there were speedboats on the river, a carousel, the Double Looper, Caterpillar and Jumping Jack, as well as regular fireworks. 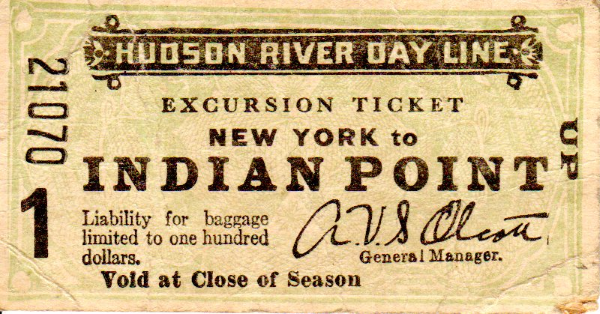 Weekend attendance peaked at 15,000, and in 1952 and 1953, Indian Point hosted a revived Westchester County Fair. Its last big event was the Cristiani Circus in 1956. The park closed later that year and became the site of a nuclear power plant.

Orange Lake Park, located 6 miles west of Newburgh and accessible by trolley, operated from 1906 to 1941. 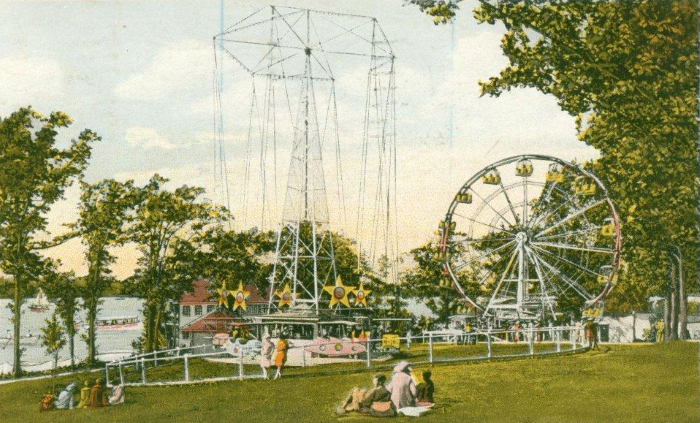 The Ferris wheel and an “airplane” ride at Orange Lake

“It was known mainly for its water sports,” Barbara said. “It had boat rides, rowboat and canoe rentals, fishing, swimming and a lakeside restaurant.” 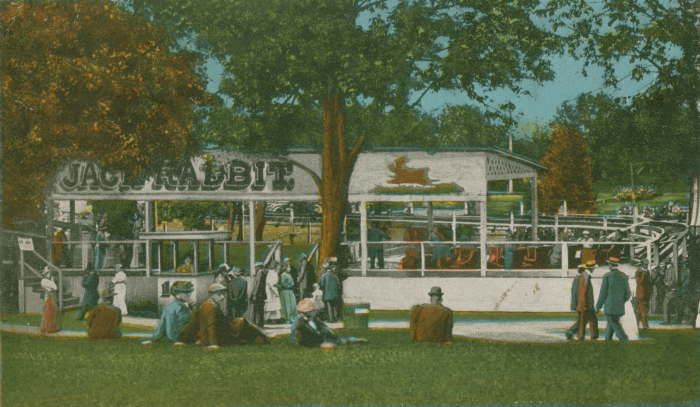 The Jack Rabbit at Orange Lake Park in Newburgh

The bandstand hosted some of the era’s big names, including Ozzie Nelson, Tommy Dorsey and Benny Goodman. Its theater hosted popular music and comedy acts, and its dance pavilion was a favorite.

Poughkeepsie’s 27-acre Woodcliff Park, built in 1927, was located on the shore of the river and known for having the country’s tallest, fastest roller coaster, the Blue Streak, and a swimming pool that could accommodate as many as 3,000 bathers. 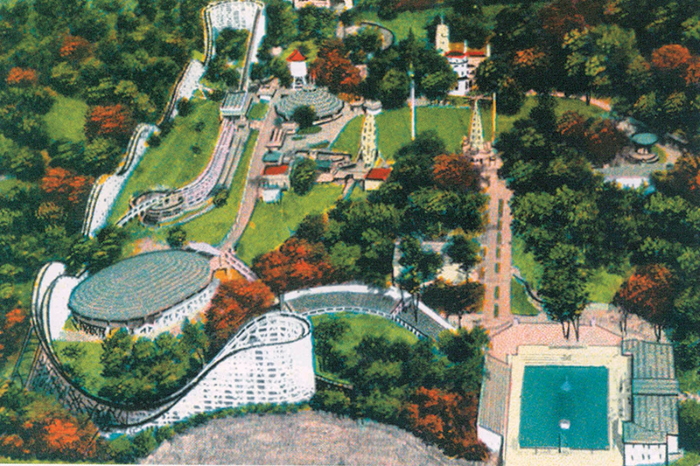 The park was also renowned for its variety of attractions, everything from boat rides, a giant airplane swing, roller-skating and arcades to its Ferris wheel, bumper cars, caterpillar ride and shooting galleries. 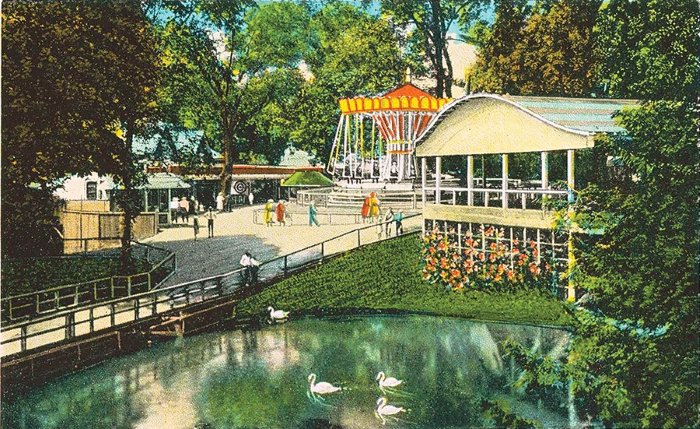 The lake at Woodcliff Park

“Woodcliff closed without much notice in 1941,” Wesley said, following a racial incident. When as many as 5,000, mostly Black, residents of the west side of Manhattan arrived by day liner, there was a confrontation with 1,000 members of a local Polish club that had reserved part of the park. Some of the New York City visitors were refused service in a restaurant and barred from the pool and police had to quell the riot that ensued.

Electric Park on Kinderhook Lake in Columbia County, which operated from about 1900 to 1921, was named for the trolleys that shuttled patrons to and from the site. It developed into the largest amusement park between New York City and Montreal, a year-round destination that attracted 1 million visitors annually. 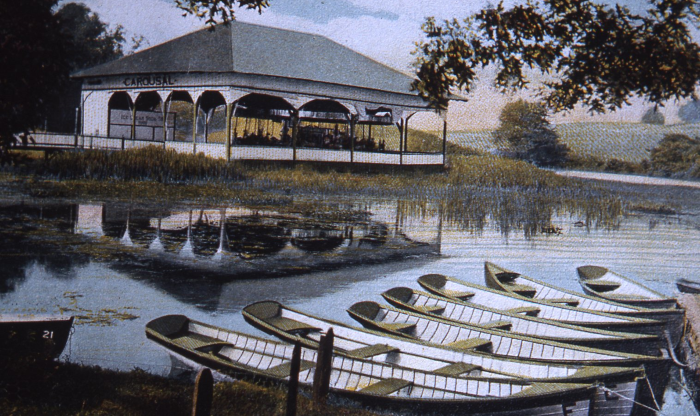 The carousel and paddle boats at Kinderhook Electric Park

One of its most popular attractions, indicative of the era, was an ornate carousel located on a small island and accessible by a foot bridge. The park itself was dry, but entrepreneurs sold alcohol just across the small lake.

When the Gottlocks visited each park location while researching their book, they found barely a trace of the once-thriving venues.

At Indian Point, only remnants of the swimming pool and ballfields remain. Orange Lake still has a small beach, but it’s surrounded by a housing development. Marist College has replaced Woodcliff Park.

On Kinderhook Lake, the only hint of the park’s bustling past is a sign for Electric Park Road and an entrance archway; the iconic carousel ended up in Columbus, Ohio, where it became part of the state fair.